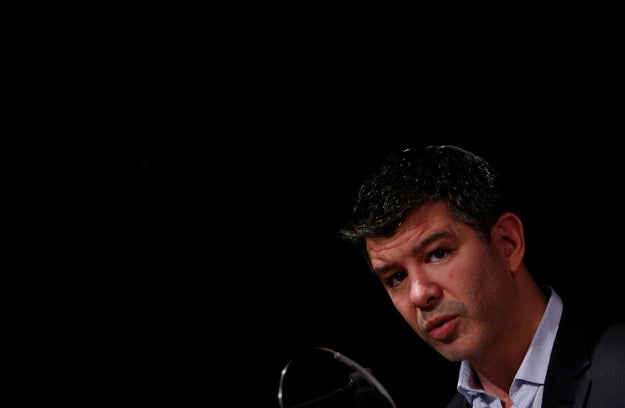 Uber Technologies cofounder and former CEO Travis Kalanick announced that he had appointed two new board members on Friday night in an unexpected move that may increase his power and sow more discord at the San Francisco-based ride-hailing company.

In a statement, Kalanick named former Xerox chairwoman and CEO Ursula Burns and former Merrill Lynch chairman and CEO John Thain to the board, which previously had nine members. Burns will be the third woman on the board, in addition to Nestlé executive vice president Wan Martello and former media executive Arianna Huffington.

Kalanick's power to unilaterally name these two board members comes from a now-disputed decision from last year, in which the board granted him the power to make three appointments as part of a $3.5 billion investment from a Saudi Arabia wealth fund. After he was removed as CEO in June, Kalanick named himself to one of the three seats and reserved the right to appoint the two other positions.

This decision comes as Uber and its investors are negotiating a multi-billion dollar deal with Japanese investment firm SoftBank and follows the company's appointment of Dara Khosrowshahi as its new CEO last month.

“I am appointing these seats now in light of a recent Board proposal to dramatically restructure the Board and significantly alter the company's voting rights,” Kalanick said in a statement. “It is therefore essential that the full Board be in place for proper deliberation to occur, especially with such experienced board members as Ursula and John.”

According to a source familiar with the situation, Benchmark Capital, a large shareholder and board seat holder, proposed a change in the company's voting structure earlier this week that would eliminate the super-voting power of shares held by early investors and executives like Kalanick. All shares, in the proposal, would carry equal weight in voting matters. The board discussed the matter on Thursday and is expected to vote on the proposal next week.

“The appointments of Ms. Burns and Mr. Thain to Uber’s Board of Directors came as a complete surprise to Uber and its Board,” said an Uber spokesperson in a statement. “That is precisely why we are working to put in place world-class governance to ensure that we are building a company every employee and shareholder can be proud of.”

Kalanick's move could be seen as a means of strengthening his position against Benchmark, which led the effort to oust him in June after employee complaints, press reports, and two internal investigations revealed sexual harassment, discrimination, and executive misbehavior at the company. Benchmark also sued Kalanick earlier this year for fraud and argued that his right to appoint new board members should be removed because he allegedly did not inform the board at the time of the issues at the company. Last month, a Delaware judge sent that lawsuit to arbitration.

A spokesperson for Benchmark did not immediately respond to a request for comment.

Kalanick had wanted to wait after the court case and arbitration to fill the two board seats, according to a person familiar with his thinking, but accelerated the process once Benchmark introduced its new voting proposal earlier this week and moved to vote on it next week. He had met with a handful of business executives over the last three months since Benchmark initiated its lawsuit just to be prepared to fill the seats if needed.

Though Kalanick had control over delegating the two seats, he was not allowed to use empty seats to cast board votes. That motivated him to go forward with appointing Burns and Thain, a move that that he discussed with some Uber board members in advance, according to the source.

What the heck is the form?
When: November 6-8, 2017
Where: OpenStack Summit in Sydney Australia
Register for The OpenStack Sydney Summit and show up!
Deadline for topic sessions was September 29th UTC by this submission form.
All Sydney Forum etherpads

Etherpads (copied from Sydney Forum wiki)
Catch-alls
If you want to post an idea, but aren’t working with a specific team or working group, you can use these:

Etherpads from Teams and Working Groups

There is some agreement that we as a community have to do something beyond mentoring new developers.

Others have mentioned that some companies are doing this to game the system in other communities besides OpenStack.

Some people in the community want to put a stop to this figuratively with a stop sign, otherwise, things will never improve. If we don’t do something now we are hurting everyone, including those developers who could have done more meaningful contributions.
Others would like before we go into creating harsh processes, we need to collect the data to show other times to provide guidance I Have not worked.
We have a lot of anecdotal information right now that we need to collect and summarize.
If the results show that there are clear abuses, rather than misunderstandings, then we can use that data to design effective blocks without hurting other contributors or creating a reputation that our community is not welcoming.

Some are unclear why there is so much outrage about these patches, to begin with. They are fixing real things.

Maybe there is a CI cost, but the faster they are merged the less likely someone is to propose it in the future which keeps the CI cost down.
If people are deeply concerned about CI resources, step one is to give us a better accounting into their existing system to see where resources are currently spent.

Status of the Stewardship Working Group

The stewardship working group was created after the first session of leadership training that the Technical Committee, User Committee, Board and other community members were invited to participate in 2016.
Follow-up on what we learned at ZingTrain and push adoption of the tools we discovered there.
While we did (and continue)

The activity of the workgroup mostly died when we decided to experiment getting rid of weekly meetings for greater inclusion.
Lost original leadership.

The workgroup is dormant until someone steps up and leads it again.
Join us on IRC Freenode in channel openstack-swg if interested.
Message

Improving the Process for Release Marketing

Release marketing is a critical heart for sharing what’s new with each release.
Let’s work together on reworking how the marketing community and projects work together to make the release communications happen.
Having multiple, repetitive demands to summarize” top features” during release time can be a pester, and having to recollect the information each time isn’t an effective use of time.

Being asked to make a polished, “Press–Friendly” message out of release can feel far outside of the PTL’s Focus areas or skills.
Technical content marketers, attempting to find the key features from release notes, mailing lists, specifications, roadmaps, whatever means interesting features are sometimes overlooked.

To address this gap, the release team and foundation marketing team proposed collecting information as part of the release tagging process.

We will collect from deliverable files to provide highlights for the series (about three items).
The text will be used to build a landing page on release.openstack.org that shows the”Key features” flagged by PTL’s that the marketing teams should be looking at during release communication times.

This page will link to the release notes so marketers can gather additional information.

Two camps appear: people that want to see OpenStack as a product with a way of doing deployments and the people who want to focus on configuration management tools.

One person gives an example of using both Ubuntu MAAS and Puppet. The puppet solution allowed for using existing deployment methodologies unlike the former.

We should start promoting and using a single solution for the bulk of the community efforts. Right now we do that with Devstack as a reference implementation that nobody should use for anything but dev/test.

This sort of idea could make other deployment efforts relevant.

Kolla came up at the PTG: scenario-based testing and documentation based on different  “constellations” or use cases.

If we agreed to cover 90% of users, that’ll boil down to 4 to 5 different “constellations.”

Someone has been working on making up and start work at a local testing environment, and it boils down to this.

AWS Glue now supports Filter and Map as part of the built-in transforms it provides for your extract, transform, and load (ETL) jobs. You can use the Filter transform to remove rows that do not meet a specified condition and quickly refine your dataset. You can combine multiple fields in a dataset into a single field using the Map transform. You can also use the Map transform to do a lookup. To learn more, please visit the Filter and Map documentation.
Quelle: aws.amazon.com